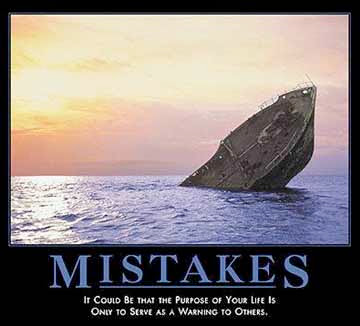 One bad leader can poison an organization. Have you seen the destructive behaviors listed below?

Here are some of the "bad leader" traits that I have witnessed.

treat people as things or objects

aren't good at fixing problems, but excel at assigning blame

believe in a sense of order, as long as they define the order

don't have many (if any) true friends and close business relationships

consistently put their needs above those of their followers

are unwilling to have a personal stake in outcomes

are deceptive or intellectually dishonest. They muddy the truth with distorted language or they change the subject to attack your beliefs

rarely give public praise to another

aren't specific or can't be pinned down regarding their position

love to communicate via e-mail to avoid facing others

use politics to gain power in a way that is unethical, unnecessary, and unwelcome

are self-centered vs. organization centered

often leave their followers "hung out to dry"

say one thing while actively planning to do something different

often make important decisions based upon sketchy information, emotion, or something out of the latest trade journal

believe they are smarter than everybody else

are as transparent as a sheet of glass

Be careful when dealing with these people.  Many of them have great power and aren't afraid to use it.  Remember, when dealing with them to put personal feelings aside and treat them as you would want to be treated.  Bad leaders are inevitable, however we often have to work with them, and we often need their help.

Posted by ProjectSteps at 7:35 PM

Brilliant. This sounds like someone I know. A former business partner that is currently taking my business!

Thanks for the clarification.