What common behaviors or attributes turn ordinary people into great people?  Here are a few I have assembled from various sources, including Tom Peter’s book "Reinventing Work, The Project 50" .
Great people almost always have had some of the traits below.
They are Risk Takers
They often don’t appear rational
They are obsessed with success (success is clearly defined up front)
Their ideas are often ahead of their time
They can be peculiar, creative, off-the-wall
They are often described as irreverent
They have a burning passion to make their dreams come true
They are determined to make a difference
They have little tolerance for the “the way it has always been done” crowd
They have thick skin
They have charisma
They thrive on chaos and often love to generate chaos
They are great at what they do
They hate J.A.M.S – Just Another Mediocre Success (Tom Peters)
They have a positive influence on the lives of others (not everyone, all the time)
They make lots of mistakes and are quick to admit they made them
They often ask forgiveness vs. permission
They hate, hate, hate politics and petty people. (They will occasionally play the “political” game to get what they want, but they know most career politicians are disingenuous, self-centered, and are only interested in furthering their own careers.)
They are great at marketing
They are often (not always) great listeners
They are masters of the little (important) things
They know how to sell
They hate whiners, complainers, and corporate Dilberts
They aspire to something higher than themselves
They are concerned with doing the “right” thing
They often make lots of people mad (usually the politicians and career procrastinators)
They know how to laugh
They call others out for a lack of commitment or disingenuous behavior
Should project managers adopt some/all of these behaviors?  The great ones already have.
Posted by ProjectSteps at 1:15 PM No comments:

No Fun at Work?

Back in 1940 a man by the name of John Gallo, an assembly worker at Ford Motor Company, was fired after being "caught in the act of smiling".  He had been warned on a previous occasion for "laughing with others".  At that time Ford's workers weren't allowed to hum, whistle, or talk with other workers, even during lunch.  Henry Ford believed that work was for work and play was for outside of work.  He believed the two should never be mixed.

Southwest Airlines has a completely different philosophy.  They believe that "people rarely succeed at anything unless they are having fun doing it".  If you review their website you see comments like “our people are our single greatest strength and most enduring longterm competitive advantage.”

Part of Southwest Airline's mantra is to:

Don’t take yourself too seriously

Be a passionate team player

What is the culture look like at your company?  Are the employees excited to come to work or do they dread coming to work?  Remember, if you and your team aren't having fun at work you aren't doing your best work.
Posted by ProjectSteps at 10:36 AM 1 comment:

I really liked George Carlin's last book; "Last Words - A Memoir".  In it he wrote the following, which I find very scary and very profound all at once.

"The worst thing about groups are their values...you will do things in  the name of a group that you would never do on your own...because you’ve lost your identity,  because you now owe your allegiance to this thing that’s bigger than you are and that controls you.

What are your group's values?  Honesty, trust, cooperation, respect, or get it done at any cost?

Project management is about groups of people working together to bring to realization the project's objectives...and doing it on time, on budget and with expected quality and scope.

In my experience, most project teams are staffed with decent, cooperative, competent people, but many times there can be one or more toxic team members bent on steering the group to service their personal agenda.  These toxic turkeys don't care about the project's objectives, they only care about themselves and their own agenda (usually hidden).  When you see this type of person on your team remove them or get your sponsor to remove them before they poison the rest of the team and stop your project's progress.

Remember what Carlin said about large groups, "the larger the group, the more toxic it is, and the more of your beauty as an individual you have to  surrender for the sake of group thought." 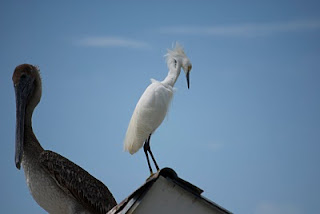 Marshall McLuhan said “first we  shape our tools and then they shape us.”  Sometimes how we are "shaped" by technology isn't pleasant or what we were expecting.  We need to keep in mind that technology for technologies' sake will never deliver anything of lasting value.  When thinking about implementing a technology ask yourself a couple of very important questions.
Can we or should we do it?
Will it make our situation simpler or more complex?
Will it help us to solve a problem or cause a problem?”
Should we do nothing?
Also, when implementing technology remember these three rules:
The customer is your partner

The customer defines the requirements

Freedom of the Press - Around the World 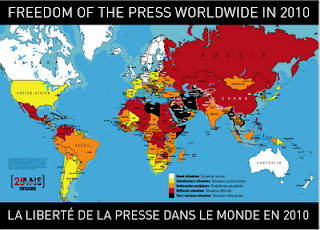 Posted by ProjectSteps at 7:48 PM No comments:

Does your Project Still have Value (revisited) 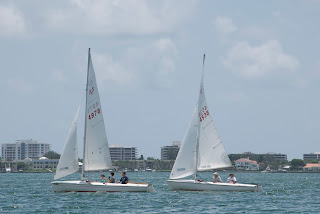 Are you working on a project that has diminished in value?  If you or others are questioning the value of one of your projects, think about these things:

What would happen in your organization if the project were cancelled?  Would some of the cancelled project's objectives find their way into an existing project... a new project? Should a portion of your current project be de-scoped because of changes beyond your control?

Does the project still link to your organizations strategic goals and/or objectives?

Does the project still have visible support from senior management?

Does the project still generate excitement?

Is your organization still going to gain all the efficiencies or be more competitive as a result of successfully completing the project?

Are you hearing a lot of negative "buzz" about the project?
Would your project have had more value if it were implemented sooner?
Is the project over budget, late?
Is scope creep a problem?
Has the project sponsor suddenly abandoned the project?
I'm know there are lots of other questions that could be asked. We need to keep in mind that all projects eventually end. Some end when they are completed successfully, and others are terminated early for a variety of reasons.

The important thing to keep in mind is that you must continually communicate across, up, and down the organization to find out what others are thinking about your project, and more importantly, you muse communicate what is happening with your project.

Posted by ProjectSteps at 6:27 PM No comments:

Do you know the difference between objective and subjective language/information? Objective information is precise and uses specific targets or numbers/indicators to help ensure the communication is clear. Subjective language uses unclear or non-specific information with terms like “accurate”, “quick”, “big”, and “best”. We can’t agree to subjective terms because they mean different things to different people.

We obviously want to use objective language whenever we communicate important information. Remember to use the “SMART” test when communicating with your project team (either in writing or verbally):

Unclear project communications are the fault of the project manager, and can lead to project delays and cost overruns. When communicating with your team, be aware of their listening filters because these will affect how your message is received. Lastly, always ask questions of your team to ensure your message is being received and understood.
Posted by ProjectSteps at 9:09 AM No comments: